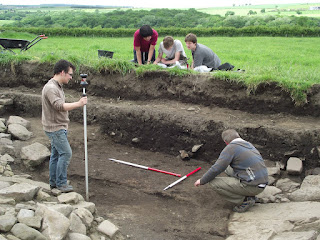 I was off site most of the morning (meeting in Berwick-upon-Tweed about fieldwork on Holy Island I'm doing in September). When I finally reached site, the weather was great and everyone was working well. In Trench 1 there is no virtually no sign that the wall of the medieval building ever existed. The cobbles beneath are coming up really nicely; very pleasing! Meanwhile, in the eastern corner, it looks like the surviving walls of the tower were once larger; we've just started to get more of these walls, it seems like some of them had been robbed out. This raises the question once more of where the back wall of the tower might be expected. Also a little work was done on defining and clearing a small stump of wall projecting back from the rampart about two metres west of the tower. Not clear what it is yet, or whether it connects with anything else. Otherwise, Trench 1 mainly saw planning and recording. In Trench 2, Sean has done more great work on the oven in Building 2. He's taken out much of the burnt clay and revealed a stone base. Crucially, he's also started recovering bits of slag; this will help us refine our understanding of the oven's purpose. Elsewhere, Janet has been looking closely at one of the cobbled areas in the central part of the site. I reckon we are ready to remove them and expose the layer beneath (we've already glimpsed this lower area elsewhere in the immediate area). Progress on the big pits in the large building is great- one was photographed today. The new floor(?) surface in the eastern most room is looking lovely with some possible features cut into it. Some nice finds today, both from Nixon- a knife blade and a tiny blue glass bead.
Posted by David Petts at 14:12