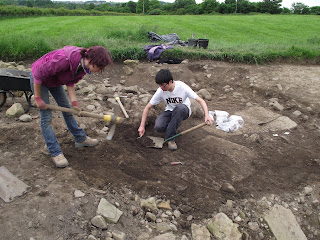 Despite rather disappointing attendance today we were able to make good progress on site. In Trench 1 there is now a gap where the north wall of the rectangular building was, and the crew working there have made great efforts in trowelling down to reveal the cobbled surface beneath. Meanwhile, work continued on the extension, revealing, predictably, even more layers of stone. Having planned his small oven, Chris continued its excavation and found a small copper alloy fitting, probably Roman, in its base. In the barrack block, more planning, although an interesting (!) new gully was also identified and partially excavated. In the eastern corner of the fort, great progress was made despite depleted numbers. Most impressive was the appearance of a substantial flagstone surface, possibly related to the putative rear wall of the adjacent tower (see picture). In Trench 2 Ong cracked on with trying to work out what the northern end of the flu in Strip Building 1 was related to- there are no obvious related features, so it's a bit of a mystery at this stage. Next door to him, Sean continued on the oven in the second strip building, he's done really well on identifying the flu/stoke hole, although the patch of burnt material at its entrance is less structured than previously thought. The relationship between this and the eastern wall of the building is still unclear, although Andrea has shown that the wall does in fact survive reasonably well at this point, and wasn't entirely robbed out. More work is being done in the central area. Some distinctions are starting to be identified in the previously rather amorphous area of dark fill, and even hints of some walls. I'll be off site most of tomorrow due to the joys of exam meetings, so I'll try and get someone else to write the blog entry tomorrow
Posted by David Petts at 14:25