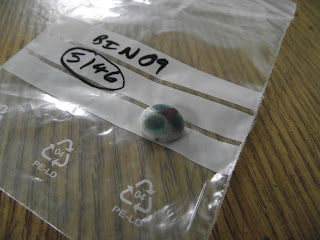 More luck with the weather today- no rain, so we were able to get a full day's work in. In Trench 1, the grid was set up properly so some of the students were able to crack on with planning. The new part of the trench which was intended to clarify the relationship between the small building and the revetments is now just getting even more confusing- there are 4-5 different alignments of wall/revetment, and possibly the internal corner of a new structure. The structure itself has now been fully drawn and is ready for dismantling! In the main barrack block, the northern compartment has been fully cleaned and photographed, so we can get on with exploring the floor surfaces. In the eastern corner, the rampart has been defined and it is possible we have yet another big pit abutting 'Hilly's Pit'. In Trench 2, lots of work on the big central area, some of the random rubble is resolving itself into more distinct areas of surface and there is plenty of back breaking work on excavating new parts of the largest pit revealed when we extended the trench slightly. At the east end, Hannah and Felix have done a great job in cleaning up the wall in the section and found another possible fragment of wall heading further east. In the smaller strip building Sean has half-section the interior of the oven and after further cleaning to the east side of the oven, there appears to be an ashy/burnt spread next to a possible stoke-hole. This is rather confusing, as this spread appears to overlie a stretch of robber trench. One possibility is that the over is much later than we thought or the robbing much earlier. A perhaps more likely alternative is that there was a stoke-hole/flu that poked out the side of the building. As ever, only more excavation will clarify the situation. As usual, plenty of finds, coins, lots of bone and pot, and a rather nice glass counter (see picture) 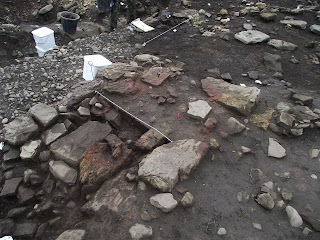