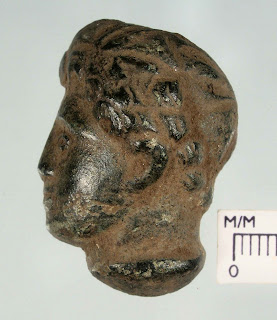 Back to the grindstone after the weekend; as it was raining the students spent some of the morning learning how to fill in context sheets. The weather then cleared and we were able to get on with some constructive work on site. In Trench A, the area of post-medieval disturbance in the south-east corner of the barrack building appears to be resolving itself into some kind of smaller building building inside or over the late Roman structure. It may have been associated with the metal working as we found slag and other industrial residue in the area last year. Elsewhere the re-excavation of Steer's trench revealed what appeared to be a drill bit, possibly used by the pre-War archaeologists ('the archaeology of archaeology...'). More generally, Trench A has seen the continued excavation and recording of late features. The stone lined gulley within the main building has been further uncovered showing that it appears to be dipping down to the east; it is possible it may even go under the external barrack wall (although this will need further work to clarify). It also produced a rather nice little bone disc, possibly a gaming counter. In Trench B in the vicus there has been more cleaning and planning. The range of material coming from this area is very interesting - plenty of coins, but also more signs of craft and industry to compliment the possible glass working reported last week. Most notably we may have evidence for the working of jet and shale. One of the bracelets found last week appeared to be unfinished, whilst we found several small tablets of shale of a type used for working today (clearly different from the natural stones found on site). The image at the top of the page is of a nice little copper alloy head; intriguingly it weights almost excactly one ounce. Could it have been used as a weight?
Posted by David Petts at 09:47