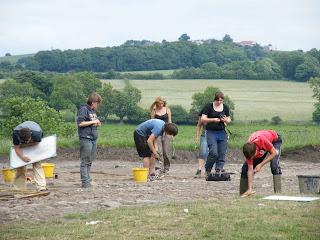 Nearly the end of the three week stay of our Durham first year undergraduates. Lots of little jobs to finish off - context sheets needing completion and drawings and plans to get sorted. Work was rather slow today as lots of people had to complete various pieces of university paperwork and some people were back in the labs doing environmental processing. In Trench A we've really defined the floor surfaces within the southern end of the barrack block; we've been considering the possibility of extending the trench slightly to get the southern end of the building, although we'll need to talk to other members of the project team and our academic advisory group before we do this. The key thing is we've reached a stage where the layers of rubble that overlapped the building have now been removed and we can now clearly define the features that lie within the walls and those outside. This means that we can shortly proceed with getting stuck into the features within the barracks. We've also found at least one post-hole clearly cut into the walls. Is this a nice early medieval feature like the post-pads in a similar position at Birdoswald or something later? More importantly, are there any more? We can also now clearly see that the clay layer that is beneath the flagstones and can be found elsewhere within the building post-dates the cruder wall and is contemporary or later than the later walls. This clay later itself is then covered by flagstones in places. It does appear currently that the walls were at their current level by the time that the flagstones were laid; possibly our single post-hole may represent a later superstructure over the floor (and its associated clearly defined hollows containing probable industrial activity). So, we're starting to really define the relative chronology- all we need now are some hard dates. Given the lack of a diagnostic early medieval material culture suite for the 5th-6th centuries AD in this part of the country and the high degree of residuality of Roman material we may have to seek a series of C14 dates to tie this sequence down a little; close comparison with the sequences in the the forthcoming publication of the excavations in the commander's house will also be useful.

In Trench B, the planning is almost completed. More work on the strip building is revealing evidence of some internal surfaces and other probable features. Whilst outside work on the roadside gullies has revealed at least one small pit (which inevitably contained nothing...). Lots to do in the forthcoming weeks.
Posted by David Petts at 13:34