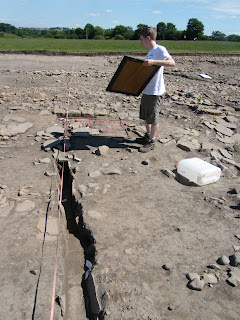 Another scorching hot day. We're continue to plan in Trench B, but we're also continuing to explore the gully along the north side of the road. Its probably of quite a late date, but contains some interesting furrows/ruts. Their relationship to some of the walls we've been assuming were Roman is unclear as they don't appear to cut them. Are the walls much later than we think? Elsewhere, having finished planning parts of the trench we're beginning to go back and investigate some of the previously identified features, including the large stone strip building. As ever, plenty of finds. In Trench A it is becoming clear that there appears to be some chronological implication in the different types of masonry construction in the main barrack building. It seems that the nice wall with stone facing and rubble core may sit on an earlier phase of less sophisticated walling; we don't think these are foundations, but are more likely an earlier wall fabric. Elsewhere, flagging is emerging to the south of the area of post-medieval activity cutting the barrack. It now appears that the flagging may have covered much of the southern half of the building, but was cut by a later (post-medieval feature). We can also see a probable earlier clay floor beneath the flagstones, which appear to sat on, rather than embedded in it.
Posted by David Petts at 13:09