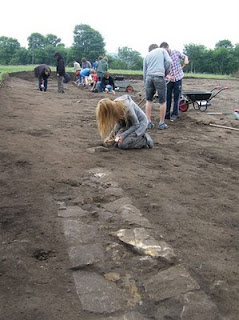 First day on site for all the Durham first year students, and lots to do. One groups were set to cleaning up last year's trench- removing the tarps (what was left of them), doing a little light weeding and then cracking straight on with working back the northern section of the trench, which saw the least cleaning last year. Meanwhile, on Trench B, after the joys of tidying up the sections, the main focus was also on cleaning back (hoeing and troweling) to begin the process of defining the many features that could be easily seen after the topsoil strip. Its clear that there are lots of stretches of wall appearing, though its not clear if any entire structures are emerging yet. It appears that there may be a number of structures partly overlapping Dere Street. This should not be a surprise. We had a surprise visit from Iain Ferris who was one of excavators of the Commander's House in the centre of the fort. He confirmed that when they were excavating a stretch of Dere Street they found medieval and post-medieval structures intruding onto the roadway. Whilst some of the structures in Trench B may be of later date, it is pretty certain that many of the other built features are certainly of Roman date. Pleasingly, there are still no signs of the layers of rubble and cobble that covered much of Trench A (so far).
Posted by David Petts at 12:05