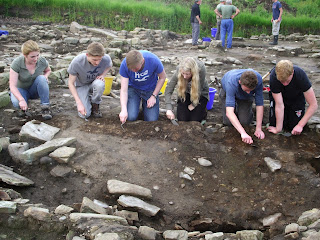 Although only on day two we are back in the swing of things. Today we were joined by our local volunteers – it was good to see so many familiar faces back on site. Overall we had nearly eighty people in the trenches, so we are moving full steam ahead.

In Trench 1, the new expanded areas of trench exploring the ramparts are moving well. In the eastern edge of the trench, the team has come down onto the rampart itself already, although there is no sign of the fort wall. In the corner of the trench, we’ve hit the wall, or at least it’s interior edge and the rubble core, which is currently being cleaned. Within the barrack itself, we’re having a good clean up in expectation of some overnight rain. We need to make some big decisions about how much of the structure we can begin to dismantle before we get much further. Some nice finds coming out including a carnelian intaglio. To the east of the barrack we are also starting to put a wide slot through the intra-vallum roadway to get a sense of its depth and longevity. On the other side of the barrack, we’ve located a rough surface or wall which needs to be cleaned and recorded

In Trench 2, progress has been equally rapid. Within the large bath-house room, nearly all the backfill from the altar excavations has been removed, with some nice finds coming out including several coins and a bone counter. On the other side of the room, the possible crude stone layer within the refuse deposit did not turn out to be very big and it has been removed and much more of the dark deposit taken up - lots of bone and a nice jet pin. It is now possible to see the base of the window in the wall face. Quite a bit of wall plaster is visible in situ, some seemingly painted red. In the small annexe, where we thought we saw steps yesterday, it turns out that we had just one step down into the structure itself and then a flat stone floor, which was cleaned and photographed. We have now started work removing the deposits that block the door from the annexe into the large room itself. Next door in the corridor, we’ve got clear evidence of some rough internal structures built into the backfill- including a possible stretch of drystone walling and a possible path or surface.

Outside the bath-house, we have begun to take apart the two post-pad buildings- the larger stones that formed the base of the second (later) structure are starting to go. We’ll soon have the smaller, earlier structure, fully exposed, with all its floors more or less intact. Finally, various groups are cleaning up the side alley that runs along the west side of the bath-house. Inevitably, today’s nicest find was from the spoilheap…a rather tasy, probably silver, ring with an intaglio set in it. This is the second ring with in situ intaglio found in our campaign of work at Binchester! 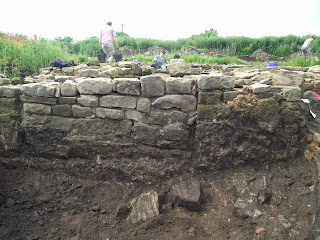 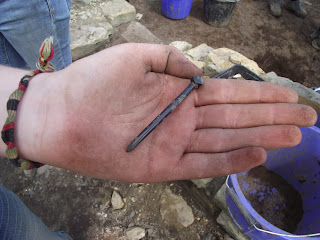 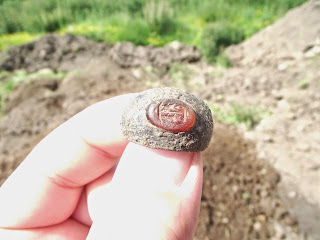 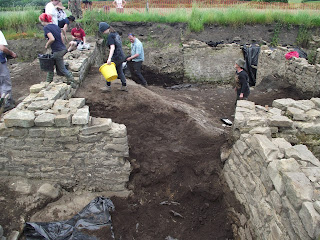