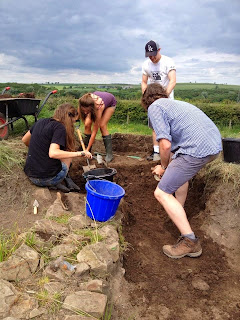 From Trench 1 Kerry Edwards reports:
"Today, in trench one, the majority of the team approached, with vigour, the main barrack blocks. They began to remove the soil deposits in an attempt to find further floor surfaces. So far this has revealed cobbled surfaces in two areas and in the meantime, a silver coin has been found, as well as many copper pieces.

Elsewhere, in the corner of the fort, work continues on the possible corner tower and curtain wall, where the full extent of the walls are slowly being revealed. Along the West side of the trench, the cobbled surfaces are being cleaned.

However, interestingly, the North East area, a group of students spent the day searching for the outer wall of the fort by extending the trench a few meters back and as a result have come across a wall which could potentially be a free standing building, possibly connected to the fort oven but not connected to the main fort wall. Other interpretations of this wall suggest it could be an interval tower. They have also managed to find the exterior wall of the trench successfully, and are going on to reveal it further.

Elsewhere in Trench one, physical activity has been taking a back burner and instead the recording equipment has been dusted off and rejuvenated. A group of students spent the morning recording the dumpy level and line levels of a few suspected features, including: two suspected post holes, a peculiar pit and a slightly awkward cobbled surface. In the North West of the trench where the cobbled surface lies, they went on to remove the stones in order to excavate the earlier levels."

"A slightly cooler day today, the majority of interesting finds from trench 2 continued to come from the metal detectorists covering the spoil heaps rather than from those excavating in the trench. However it is always nice to hear that there is a coin in your spoil and we had several today. A lead weight was another interesting metallic find. It might sound rather silly, but it's incredible how heavy lead is. Being so used to our light alloys in coins to pick up something around the size of a 50p but for it to weight the equivalent of probably 2 £1 coins is quite a strange sensation!

Further finds of the day included two more hair pins, one of jet and one possibly of bone. Both of those came from the dump in the Bath House, so are likely to be later in date. Someone also had the excitement of finding an almost complete pot: whether it was more complete before they found it I never found out, but it's certainly something to get more excited about than the considerable quantities of fragmentary animal bone we've been finding everywhere!

Personally, my moment of the day was when we finally got round to removing the tarpaulin which marks the bottom of last years excavation in the bath house, but maybe that's me! No altars so far, but we'll be sure to be yelling it to everyone if we do find one!"
Posted by David Petts at 15:56