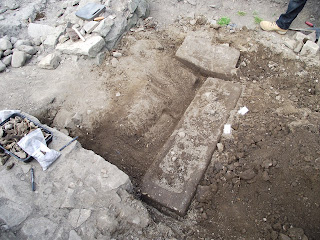 Today has very much been Trench 1's day. Much of the focus of activity was on defining the course of our new north-south wall that runs parallel to the east side of the barrack block. It is now more or less clear along its entire length. It also appears to line up with a wall projecting southwards from the edge of the north rampart. The cleaning work has been very useful- it is shown that the nice pot we had the other day was clearly carefully placed in a hole cut into the foundations, pretty conclusive evidence of some kind of special deposition. Our problematic gable wall has been followed along in an eastwards direction to the point where it is cut by Hilly's pit. Frustratingly this pit has completely destroyed the intersection of the gable and the new wall. We can only assume at this point that they were connected and part of the same structure. We've also seen another small stub of wall emerging from the eastern rampart, running west-east. It is probably part of some kind of feature built into the rampart itself. We have a similar situation where the stub of north-south wall emerges from the north rampart (this is the bit of wall that aligns directly on the new wall). Here, late on Friday, Matt identified an adjacent west-east wall; together they appear to form some kind of small rampart structure. In working on the interior, we found the top of a nicely worked stone trough. Have we found a latrine? At the southern end of the barrack, the team working there have probably stumbled across a small dispersed coin hoard- they have (I think) at least eight Roman coins as well as good number of unidentified Cu objs, which may also turn out to be coins. In Trench 2, Vincent and Joe finished removing the layer they were working on, so the room was tidied up for a photo. Next door, in the big room, the dark layer over the next layer of flagstones has now been removed. These will need to be cleaned up and planned soon. We will also need to remove the large slabs in the north-east corner of the room, as we are possibly getting out of sequence. Ideally, we like to remove the features stratigraphically. To the south of the building, the eastern end of the post-pad building has been cleaned up, and the entire structure was tidied up and a photo taken. Generally, in this trench today, a lot of the features appeared to be producing quite significant quantities of animal bone. So, overall, progress is continuing at a decent pace, and the weather is still set fair. How different from last year! 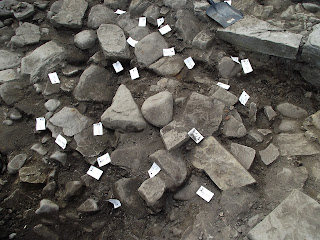 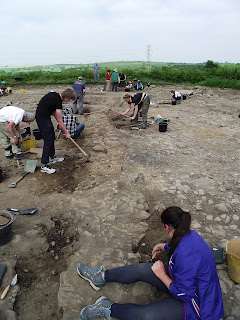 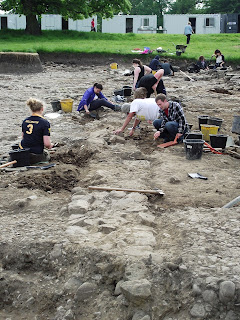 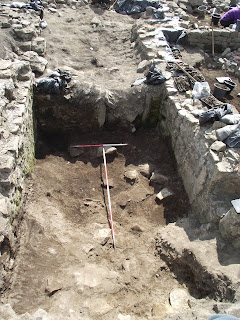 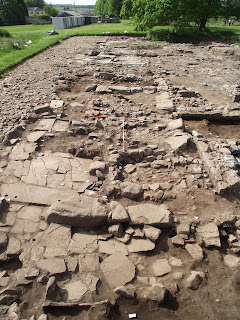