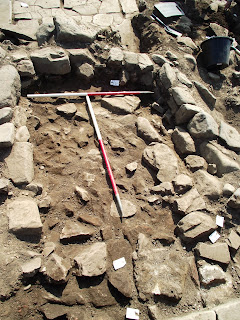 One whole week without rain! Our students have been great - and we've made brilliant progress. So after our first week, where are we? Today's puzzle centres on the north gable wall of the barrack. As we've seen the wall continued west beyond the west wall of the barrack as it survives today. We've been hypothesising that it indicated that there was a second range of the barrack block (as is common in Roman barracks), but that only the eastern range had survived into the later Roman period. However, with the gable now appearing also to continue to the east, the situation is complicated. Presumably at some point this continuation of the gable must have intersected the new north-south wall emerging to the east of the barrack (although it looks like this putative intersection was cut by Hilly's Pit). This would essentially form an additional range of structures to the east of our current barrack. However, although there are lots of examples of double-pile barracks, but I can't say I know of any example of a barrack three blocks deep. One way of explaining this situation is that, as we know, the gable wall as well as forming the structural support for the northern end of the barrack, also formed the southern edge of the drainage gully. It is possible that the drainage gully continued, but not the structure itself. It thus remains to be seen whether in fact either of the suggested extensions of the building initially implied by the long gable wall will actually materialize, and if so, on which side. That being said, the gable wall extension to the west is looking very much like a proper structural wall with external facing stones and a rubble fill- it would be rather over engineered for a gully. In Trench 2, the area of debate is around the post-pad building. This is clearly relatively late, as it blocks the entrance to the main building and appears high in the sequence. Today, Peter suggested that we might actually be able to see two phases of this structure. There looks like there may be an earlier phase which incorporates the 'park railing' stones, and appears to be neatly contiguous with the flagged floor, at least at the east end. There is then a second phase of structure, with larger stones placed above the 'park railing' stones- and possibly an extension to the west. The large square 'hearth' would probably fit best in this second phase as it appears to overlie the stone flagged floor. Elsewhere in this trench, the levels in the large room in the main building continue to be reduced. The students are currently working there way through a particularly thick earth deposit, although it is clear that there is at least one more stone lining to come. In the next room Vincent and Joe are still also slowly descending and are coming down to a sandy/gravelly layer. We must be close to bottoming out in this area. 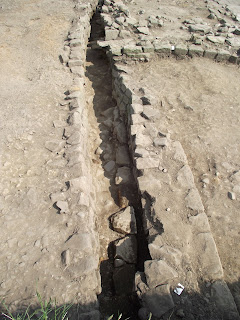