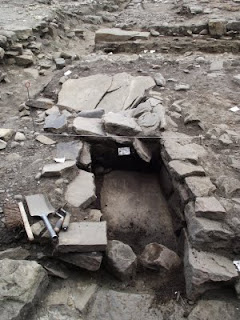 Apologies for the lateness of this entry- we had our big party on Friday night to say farewell to the US team, so its taken a little while to recover and find time to download the photos and get 20 minutes to sit down in front of a computer.

Anyhow, not a huge amount to report from Friday- obviously, we were focussing on finishing of the as much recording as we could before the change in the team. I'd pick out a couple of key things. First, is the better understanding we are getting of the main barrack building in Trench 1. We are getting a much clearer sense of the complexity of the structure; it seems to have at least three separate sections. The northern part of the building has well worked facing stones in three and possibly four of its walls. The southern gable wall was immediately to the north of the large internal pit, which appears to have caused it to subside. The northern gable wall is not so obviously well constructed, but work on a pit adjacent to it, suggests that better quality walling may survive deeper down. This northern compartment also clearly has a complex later history. For example, there is a dividing wall cutting across the building which overlies an earlier flagstone floor and thus has no subsurface foundations. I've already touched on the flimsy nature of the northern gable end, which may suggest that the earlier wall was rebuilt. We've also identified a doorway in the eastern side of this part of the building.

To the south of this is a distinctly different build, with the foundation courses at a different level. It appears to be paved with large flagstones running into the pit; there are also one, possibly two doorways adjacent to where the structure meets the more substantial northern element of the building.

The issue of later use of the buildings also extends to Trench 2, where Daniel has been excavating a gully within the western strip building (see picture). This is a substantial stone lined feature and contained some nice finds including Roman glass and a bone counter/gaming piece. However, its extent is uncertain as one end is cut by a robber trench and the other by the 18th century roadside ditch. This means it is not clear whether the gully actually went through the western wall and where else it went; it can't be linked clearly to any other features. Nonetheless, the substantial nature of its construction is impressive.
Posted by David Petts at 02:52