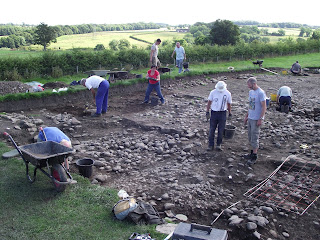 Despite the fact we've only got one week to go, we're still beavering away. Although there is an increasing level of recording going on, we're still making progress with excavation. We've now got another stretch of roadside gully, which can be now seen to run the entire length of the trench, except where it is covered over by the medieval building. At the north end it appears to be curving slightly, either to avoid the bread oven or to begin to turn the corner to run along the north-eastern rampart. It is also possible to recognise a series of stone 'spines' perpendicular to the main gully- what are these for? Today we started cleaning up one of the last remaining areas of the trench that has been relatively under investigated, the edge of the north-eastern rampart. We have found at least one pit cut into the clay make-up of the bank, it will be interesting to see if the roadside gully emerges on this side too.

Elsewhere, there was more work inside the barrack, cleaning and defining floors. The new stretch of wall (the extension of the northern gable end) is becoming clearer; interestingly, a possible doorway in this gable end has now disappeare as we've been able to more clearly define the course of the end wall. 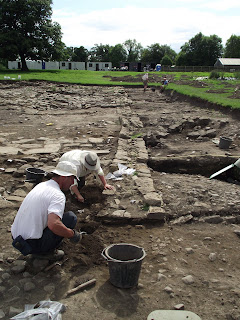