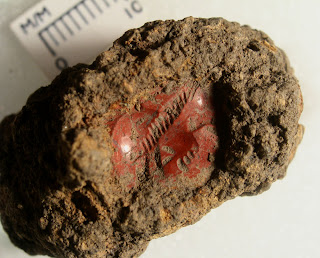 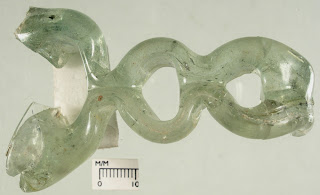 Trench Two is nearly wound down and it was Jamie's last day on site (this season), so he was frantically recording. Still a small amount of excavation going on though, including further stones being revealed in the huge pit in the 'bath building'.

Most activity is now focused in Trench 1. Another section of rampart has been examined and pleasingly yet more of the roadside gully has appeared - and as Jamie noted in yesterday's blog, some of the cobbled surface has now appeared running beneath the medieval building (just short of where our sondage stopped last year). There was a group working away on the cobbled area near the gully/big pit. They are bringing to light a very nice surface made up of the distinctive small stones which seems to be a feature of many Roman surfaces on this site. Lots more work on the interior of the northern compartment of the barrack - floor surfaces coming up, and Marie has uncovered what appears to be a substantial stone trough. We haven't removed it yet, but it reminds me of the large stone bowl we found in the nearby big pit last year.

Finally, and perhaps most excitingly, Rosie and Jonathan have uncovered a stretch of walling to the immediate west of the northern end of the barrack, which appears to be a westward extension of the gable end. We've previously flagged up that the current structure we've uncovered is rather narrow for a barrack, which are more typically have two parallel ranges of rooms. Have we just found evidence for a second range of rooms? It is possible that the two ranges had different histories in the very late Roman period, with only our main 'block' surviving into the later 4th century. Of course, this might be just a massive over interpretation of just a small stretch of wall...

Today's photos are a collection of some our recent finds, including another image of our intaglio ring, a glass jug handle of 2nd/3rd century AD date.
Posted by David Petts at 12:41