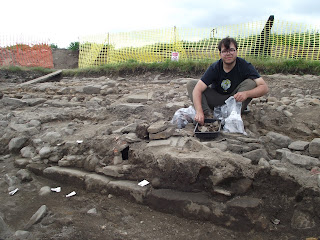 Another busy day, although we were hit by rain mid-morning. In Trench 1, the action continues along the northern strip. Finally, as anticipated, we've identified the roadside kerb in our section of road in the north-west corner; this replicates the pattern found in the road section further to the east. Just to the north of this, Pete has been quietly exposing more of the curtain wall, digging  a slot down to expose the off-sets and possible foundations. In the eastern road section we've started to expand the area uncovered by commencing to remove more material to its west.

Elsewhere in the barrack, there is more planning and recording, as well as further work defining our new post-holes and cleaning down the interior surfaces. We can see the complexity of the interior features in several places- particularly where several phases of stable drainage gully can be seen to clearly intersect each other as they have been recut and reworked. We've also been looking again at the eastern intra-vallum road. We've put two more slots through- the southern slot is still showing earlier road layers, but our northern slot appears to have removed all the road surfaces and has hit a black clay-silt layers which is very damp and sticky. It is not clear what this represents- it could indicate a period of disuse or perhaps represent an underlying pre-road deposit.

In Trench 2, the area of new flue-tiles in the bath-house has continued to be cleaned and now looks very nice. As far as we can tell not all the flue-pipes continued downwards- although some clearly do- inevitably the arrangement is perhaps more complex than we first anticipated. In the main room, there is still much recording to do, but there has been some more excavation, notably at the intersection of the two drainage culverts- this has shown that they appear to be contemporary.

In the areas to the south of the bath-house, Morris and Steven have been trowelling back a thick deposit which appears to be very rich in charcoal. Nearby, the others have revealed more of one of the kerb lines, as well as removing the deposits nearby.

Along the western flank of the bath-house, there has been great movement hacking away the road surfaces, revealing a nicely metalled surface. This process has revealed more of the strange post/stake hole voids cutting through this surface - clearly marking a fence line.

After a couple of days with few interesting finds, things got a bit more interesting today, with yet another ring with an intaglio and nice metal mount from the spoil heap and some interesting glass and ceramics. 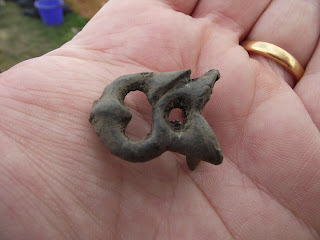 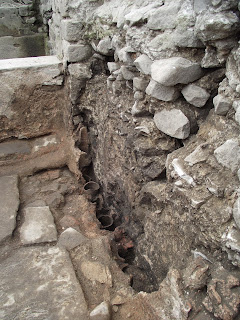 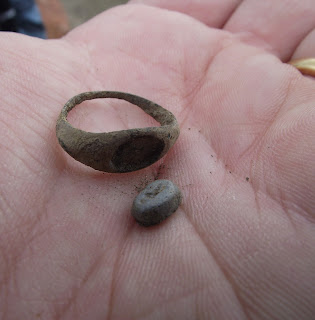 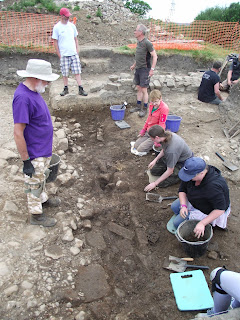